10 Things I Love About James Bond!

A little off topic to what I usually blog about. Hey but what is life if you don't add a bit of the spontaneous. This blog is dedicated to my Dad! We seldom had much in common but my fondest memories where of cold cut platters and James Bond Movies on New Year’s Eve. Something I try to do with my boys.


Yes Mr. Bond has been a chauvinist in the years since his arrival and yes, he has done little for women’s movements with his “shaken not stirred” world of James Bond.
However, as a woman, and as someone of a certain age, I can’t help but smile at the cheesy awful one-liners, the clamoring Bond Girls, the gadgets, Q…and you know he does end up saving the girl!
I know the woman in me should despise these movies, but I simply can’t. All that over the top testosterone just makes me think of a time gone by, sometimes simpler, a world less complicated, not necessarily better but less complicated. A black and white version of the HD world of today.
Having said that, I won’t defend my love for Mr. Bond or even the Austin Powers movies making fun of him. It’s always great fun to watch.
I will defend them saying they have tried to move up with the times as they go along and I believe doing a good job of it. Bond is a little more serious these days, but I think it fits with our newest James Bond, Daniel Craig.
So without further ado, and with the new movie "Spectre" coming out in November, here are the top ten things I LOVE about James Bond!
So although Mr. Bond has had many incarnations, he is still with us. Moving with the times and offering us some great memories along the way. After 53 years since the first movie release, it’s showed us that the entertainment value is still there and that we love them corny or not.
Hoping to save Spectre for a family fun night at New Years with the boys! Especially my younger son who shares my love for vintage Bond!
Here's the new trailer for the newest installment! Looks good and in touch with our times! You go Mr. Bond! 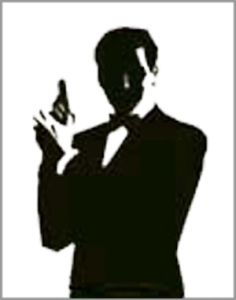