The Gate Without A Fence

Now I can hear all of you saying....WHHAATTT??
Why would you spend your money on such things?
Charlatans who steal your money to feed you a bunch of crap that is not even based in anything that can verified.
YES YES...you are absolutely right.
But I was young and ignorant...and OK...young and stupid.

But I am glad I visited this particular gentleman.
Two special events took place that night. First one was that he gave me one of my first epiphanies ever.
I sat in front of him expecting him to reveal my inner most secrets of my future.
Would I be rich and famous?

Of course, I never got answers to those questions, from anyone really. And even if I had, would I have believed them?
Probably not. I was so far from where I am today that such things would have been almost like a fairy tale to me.

And here is the only thing I remember from that experience. He turned a bunch of cards on the table and then paused at one in particular. Let me describe it for you. It had a house in the background with a nice little path running up to it and in front of it it had a gate that was locked. 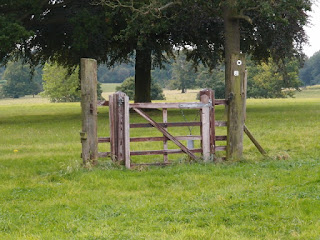 After his pause, he asked me how I would get to the house. And I told him bluntly that I could not unless I climbed over the gate.

He asked me to take a closer look at the picture and to describe it for him.

I soon realized that beside the gate were no fences and that I could simply just walk around the gate and make my way to the house.

I was so fixated on the gate and the path that I completely missed the different option.

He then told me that this is what my life had been so far. A series of locked gates that I could not see past and that if I could find my way around focused approach I had taken so far in my life, I would most certainly find success.

This moment of perfect clarity has stayed with me through the years although I did not really take his advice up until the last five years which have been much more successful in terms of getting what I want. I chose to believe that maybe I was not ready for his message at the time, but I kept it close to the surface so it could serve me as it has lately in my life.

Sometimes the solutions are nothing we want to hear or may so unconventional that we wonder how the heck that could ever work, but they are available to us nonetheless if we can have the ability to look beyond the locked gate.

What is the other event that took place that night you may ask?
As it would happen, the foundation did a loud crack and the whole building shook. While no one was hurt, I still remember thinking that maybe that was the "period" to that sentence or that gift of knowledge that I was given. Anyway, for whatever reason, that restaurant where those readings were taking place ended up closing permanently 6 months later.

Do you have any one moment in your life that made you stop in your tracks and eventually shaped a new way of thinking in your life?

Or are you waiting such as I did to implement it any day now?